Sew Cal Gal's Free Motion Quilting 2012 Challenge has been a blast. I have looked forward to working on each and every FMQ project. I have learned many new techniques and my confidence has dramatically improved. So here is a look back at the 2012 challenges. 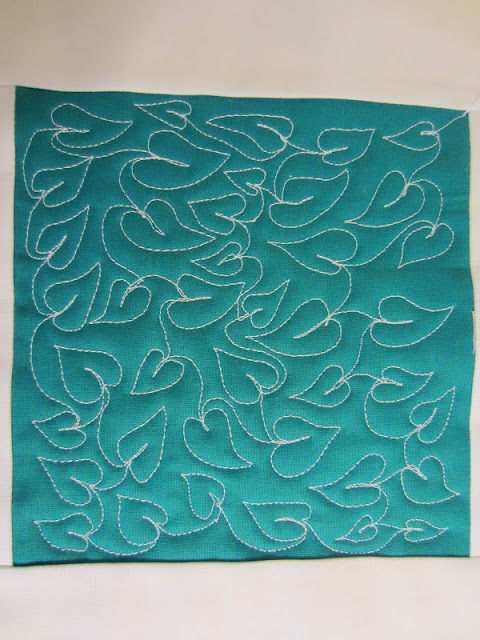 This motif actually got stitched into two quilts this year. And I'm happy to report that both are completed.


February 2012 - Echo Feather Plume tutorial by Diane Gaudynski
(Click here for February's post)
I love stitching feathers, especially free form. So for this month I stitched up a pair of potholders. 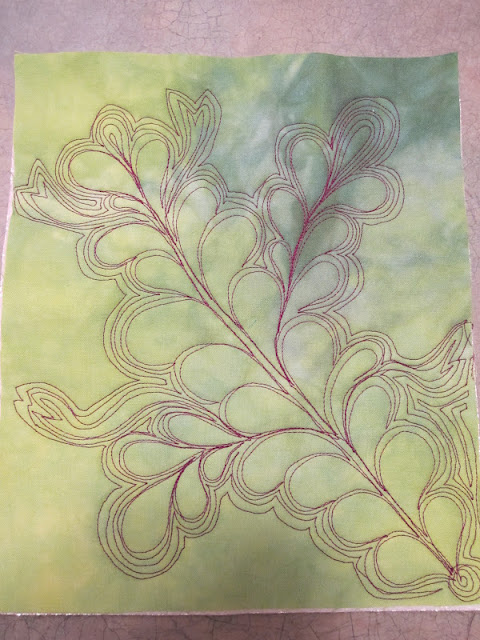 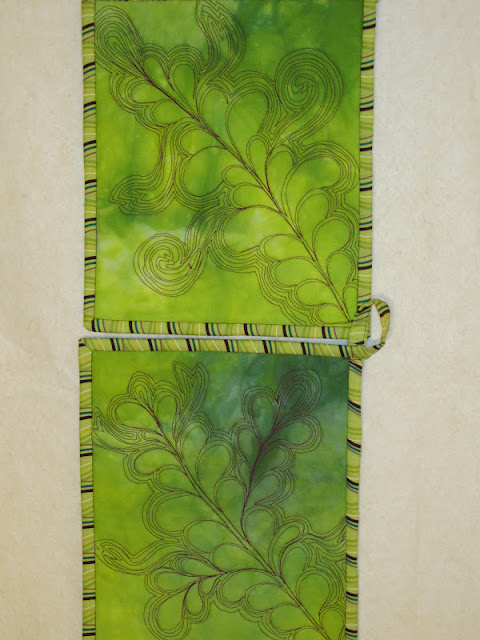 I actually use these potholders daily. I think it maybe time for some new ones!

March 2012 - Doodled Designs tutorial by Ann Fahl
(Click here for March's post)
By March, I was feeling much bolder and willing to try new things. So I doodled (one of my favorite pastimes) and came up with this little heart design.


April 2012 - Motif Transfer Technique tutorial by Don Linn
(Click here for April's post)
This was the most awesome technique to transfer designs onto a quilt. I have used this technique repeatedly over the year. For the challenge, I transferred a bird, which was eventually turned into a cool little throw pillow.


May 2012 - Train Tracks tutorial by Leah Day
(Click here for May's post)
As many of you know, I'm a huge fan of Leah Day and participate in her weekly QAL Wednesdays. So it was wonderful to stitch out train tracks for my may challenge. For this challenge, I also incorporated Don Linn's transfer method for the train and micro-zippling from Leah Day's QAL. 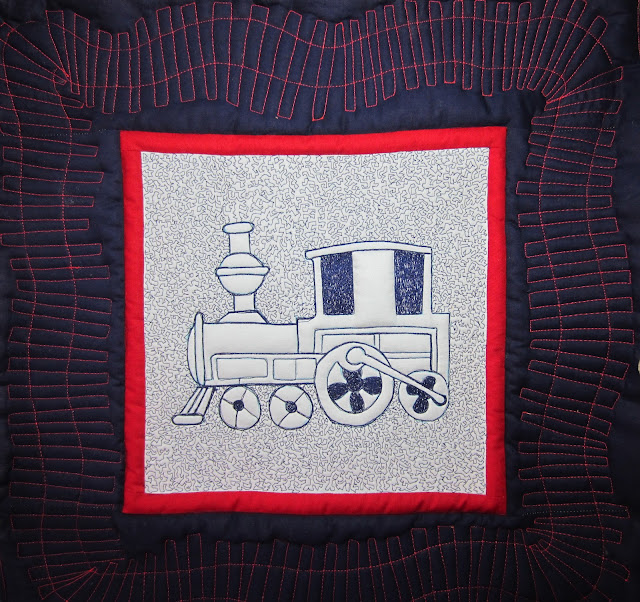 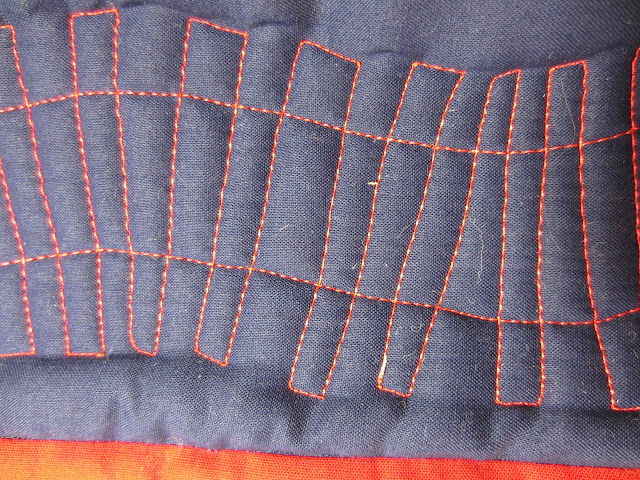 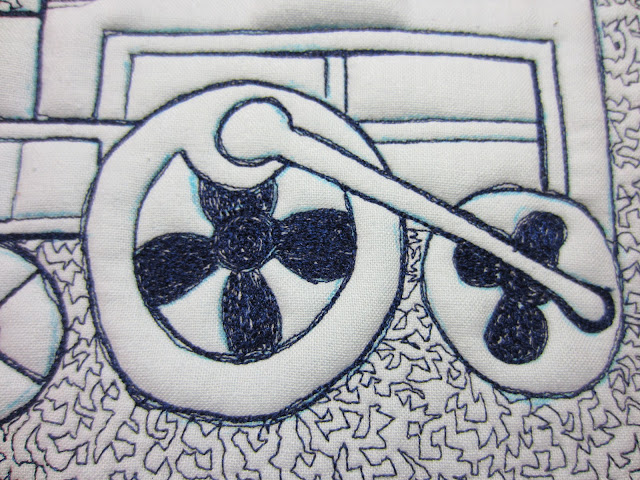 June 2012 - Divide and Conquer tutorial by Cindy Needham
(Click here for June's post)
By June, I was having some fun now and had the chance to remember my childhood with a little flower power. Cindy's tutorial had us divide up the space and use different fills. Lots of fun.


July 2012 - Tiles tutorial by Angela Walters
(Click here for July's post)
July was a step backwards for me. I purchase a new machine, a Pfaff QE 4.0. I do like this machine, but it has been a challenge getting it to stitch well all of the time. Of course, I thought I should be able to just stitch out this design, right into a quilt. Well.... maybe eventually.

August 2012 - Jester's Hat tutorial by Wendy Sheppard
(Click here for August's post)
This is a great quilting motif, but I will have to say I had to draw this design over and over again until I could naturally go from one "hat" to the next. Just a little muscle memory challenge. 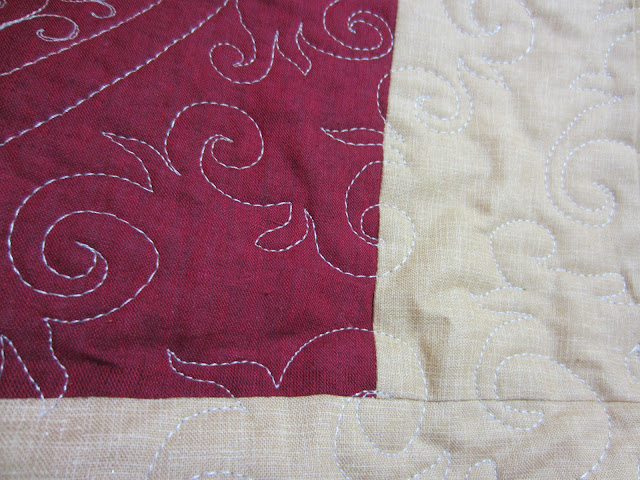 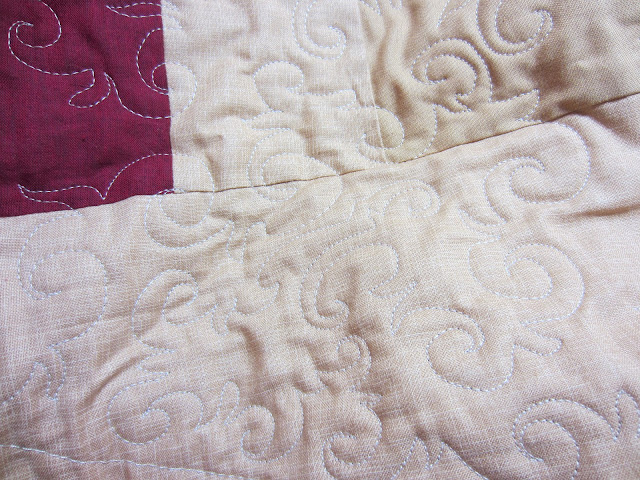 September 2012 - Fancy Feather tutorial by Paula Reid
(Click here for September's post)
By September I was feel confident again and decided to do a little changing up of the design. 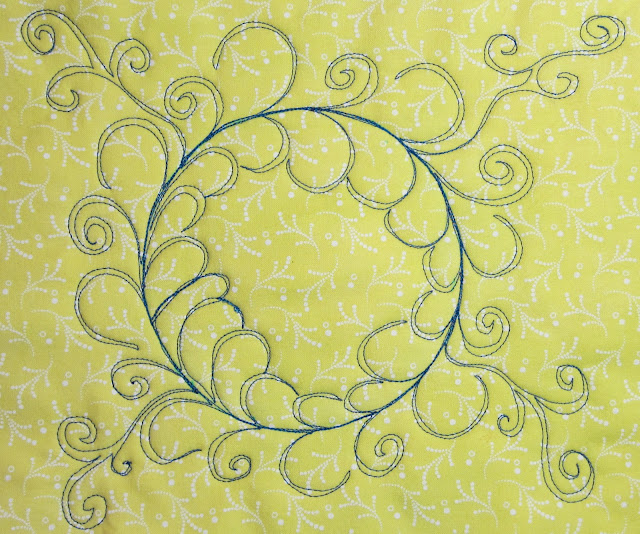 October 2012 - Playing with Threads tutorial by Teri Lucas
(Click here for October's post)
I love thread almost as much as I love fabric. The more I quilt, the more thread types I want to experiment with. So this was a fun month to play! 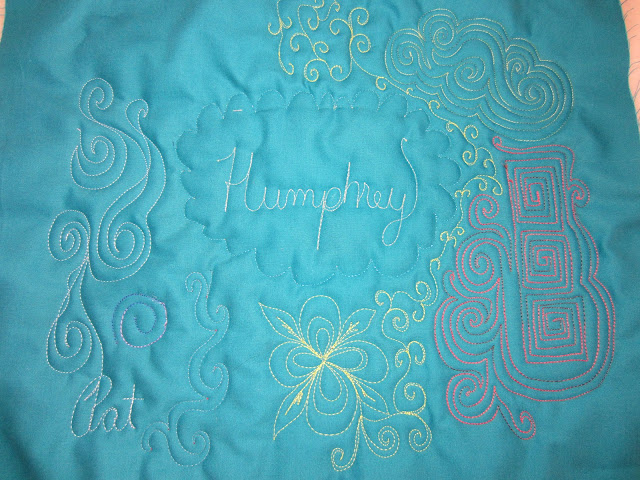 November 2012 - Spiral Variations tutorial by Sarah Vedeler
(Click here for November's post)
I do love me some spirals. It was the perfect motif to stitch into the sides of my Expanding Possibilities quilt. 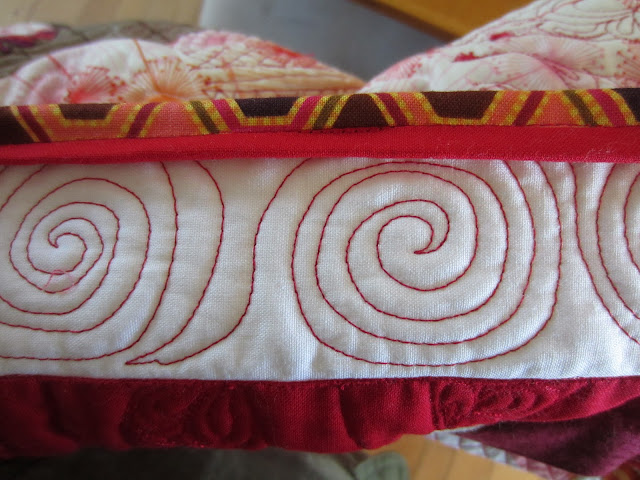 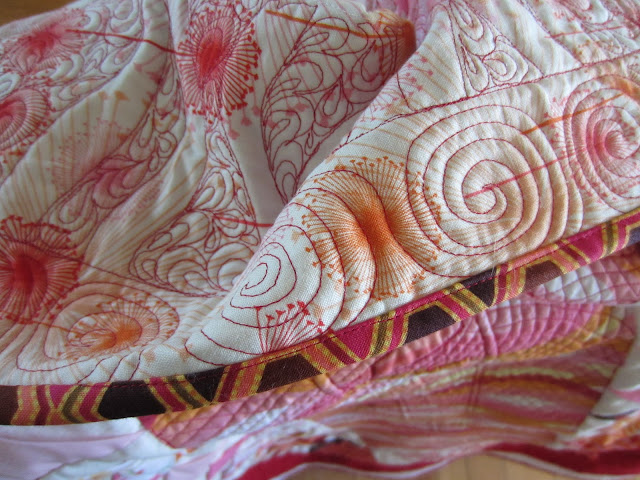 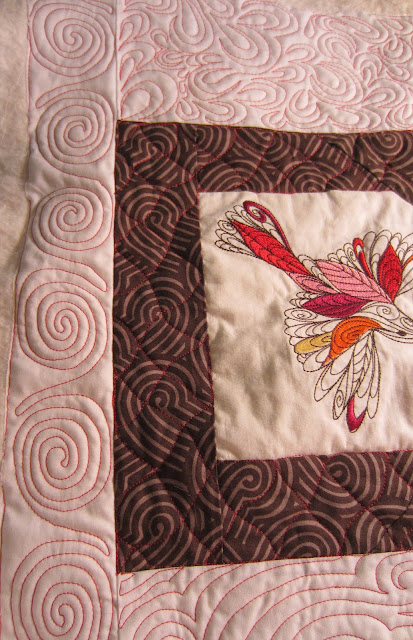 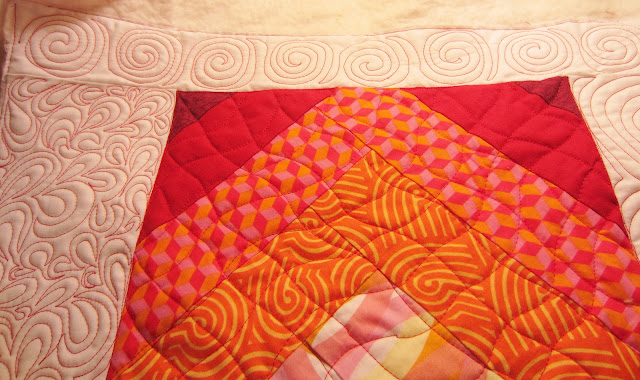 December 2012 - FMQ Borders tutorial by Patsy Thompson
(Click here for December's post)
Don't we all love border fills. This month's tutorial didn't disappoint, it even inspired a quilt design, my Koi Pond quilt (I can't wait to start quilting all those borders). So I decided, for the sake of time, to create a pond pillow top with lots of FMQ borders. 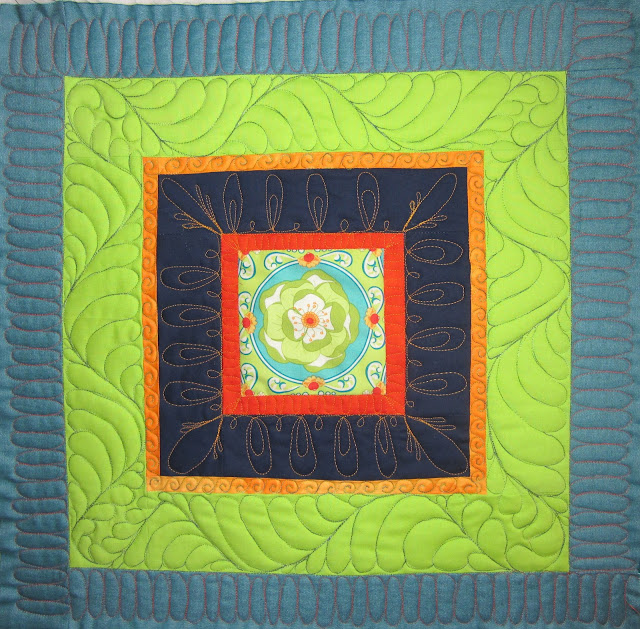 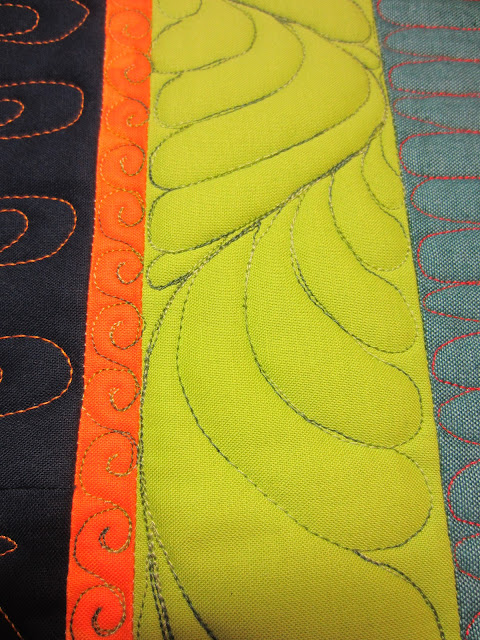 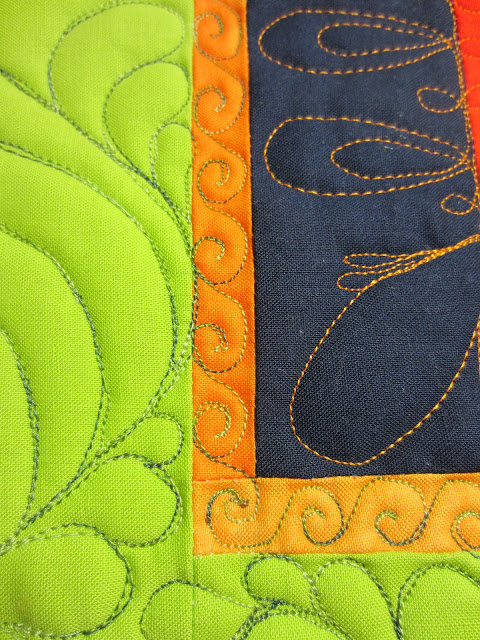 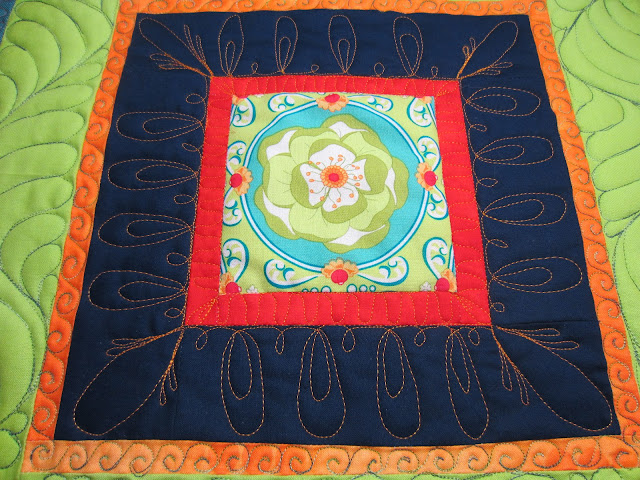 I would be remiss if I didn't give some serious thank you's to Sew Cal Gal and her fabulous sponsors and a huge thank you to all of the FMQ experts that took the time to create these great tutorials.

I have had so much fun this year with Sew Cal Gal's FMQ challenge. December is no exception. Patsy Thompson gave a great tutorial on borders and feathers. As a matter of fact, it was all those borders that were the inspiration for my latest quilt, Koi Pond. I didn't have time to quilt that quilt, so I decided to make a coordinating pillow to use as my assignment this month. 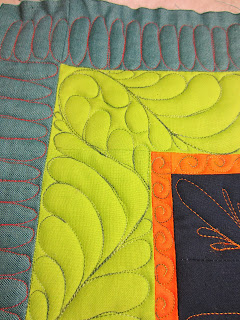 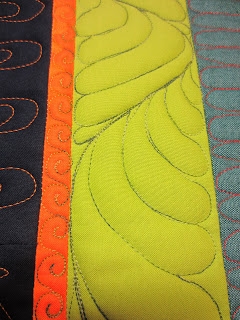 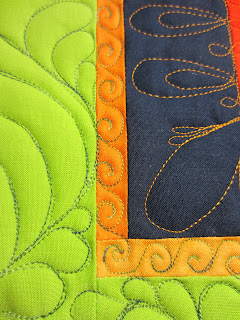 I really love the bright colors and the stitching just seems to set it all off. I've done feathers before, but never like these. I love how they fill the whole border. I used three different threads. Orange Isacord for the center, a varigated green King Tut for the spirals and feathers and a orangy-red polyester for the outer border.


The fabric on the back isn't really pretty. It was just some fabric I had in my stash, since it will be on the inside of the pillow. Thank you Patsy Thompson for a great tutorial.

Well, I've been a bit under the weather the last few days with the flu, yesterday I decided I felt good enough to quilt. I decided to work on something completely new and different. I didn't have a complete plan for this quilt, just and idea swimming in my head. So I just went for it and had fun. 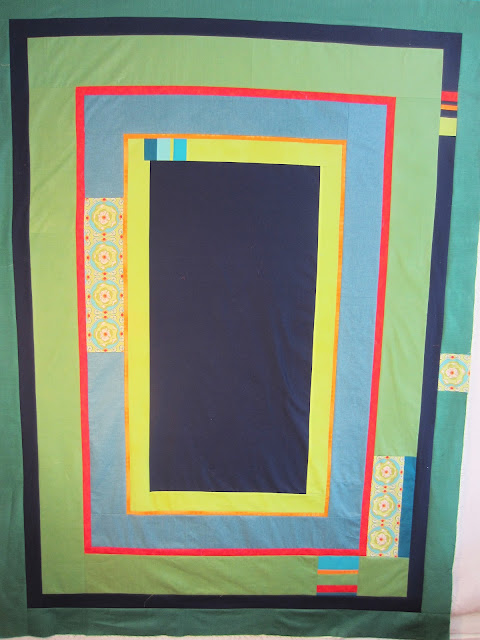 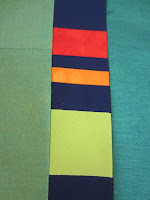 These aren't the greatest pictures, but it's a fairly large (approx. 58" x 78") quilt to put up on my design wall. I had so much fun just attaching borders with abandon and adding in little areas of bling.  I have some fun ideas for the navy center, which I'm sure you can guest from my title. I'm going to try to machine embroider koi as part of the quilting. I know you can do it, the question is can "I" do it. Hmm, we shall see. 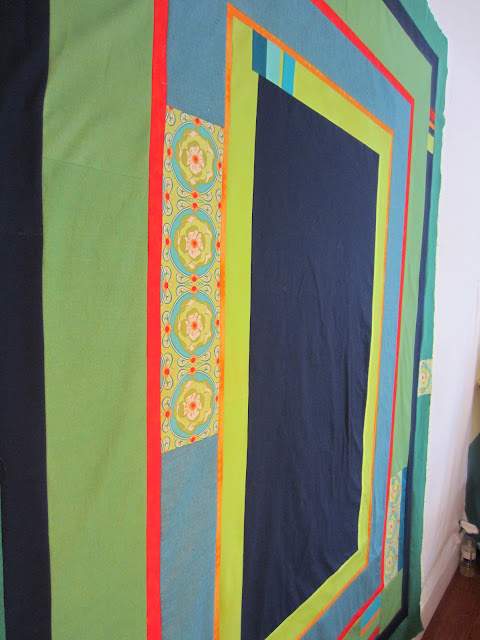 Since I finished this quilt top today, I think I will link up to TGIFF at Sparrow In Flight and Finish Friday at Richard and Tanya Quilts.

Promote Your Page Too

Featured on A Quilt Story